Why Do People Confuse Religion and Culture? 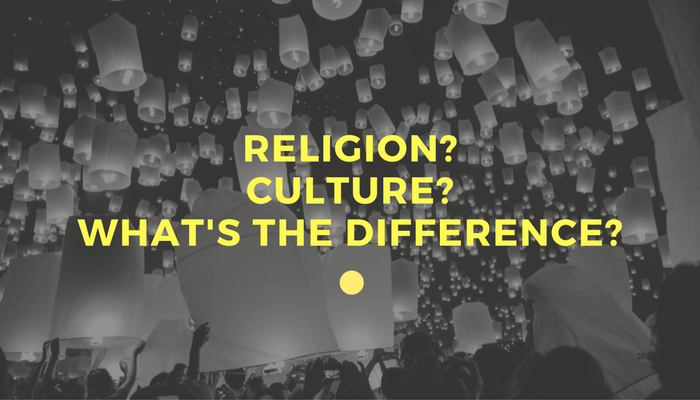 Studying the history of the world is a complicated thing. Societies develop by means of a lot of turning gears; we develop depending on our similarities, our differences, our ability to interact with one another, and our ability to work with each to determine and solve problems. Systems of interaction between individuals and communities, like an economy or a sense of patriotism, work as vehicles to bring people together to form a unified group. One of the most engaging and fascinating foundations of a society is its culture, defined by the Oxford Learners’ Dictionary as “the customs and beliefs, art, way of life and social organization of a particular country or group.”

This definition is very broad and encompasses very essential parts of what communities so unique and contributive to the beauty of the global fabric. This may have something to do with another aspect of society that is usually a lot more difficult to talk about… Religion.

Religion is defined by O.L.D. as”one of the systems of faith that are based on the belief in the existence of a particular god or gods, or in the teachings of a spiritual leader.” Religion, as an institution, qualifies for the same definitive qualities that culture does, yet many people can’t seem to figure out what comes from religion and what comes from culture. There’s a very good reason why!

When we look back at the world millennia, or centuries, or even decades ago, you’ll note the ability of people to communicate with one another was significantly more difficult than we can ever realize in the 21st century. Months, if not years, of exploration and discovery led to interactions and exchanges that continue to impact the world, for better or for worse. Whether we like it or not, both culture and religion have played significant roles in the developing and ever-changing atmosphere of how the world is interconnected today.

What happens very happen, because of this, is people begin to lose sight of if a practice, or a perspective, or a lifestyle had its humble beginnings from the constructs of a society, or the specific constructs of a faith tradition… Religion and culture are just that amalgamated, and therefore, just as complicated to understand. Culture is influenced by religion, and religion is influenced by culture. And that is okay.

This is an important connection to realize and understand because of the impact that both these aspects have on each other and on human beings overall. Whether the values religion and culture develop are positive or negative, they both have ways to making themselves mainstream in society through time. With that said, though, there are key elements that make religion and culture different from one another.

Farah Pandith, former Special Representative to Muslim Communities for the U.S. Department of State, discusses the difference between culture and religion at Yale University:

Keeping these points all in mind, we must understand the indispensable role they play in how communities collaborate and share solidarity with one another. It is essential for culture and religion to be tools for unity in diversity, as well as diversity in unity. It is through varied views of the world that we can come together to see what commonalities can be uprooted to let us recognize and cherish the humanity in one another.

This content is created with the support of the Stevens Initiative, which is working to increase understanding between youth in the US and the Middle East. Please visit ampglobalyouth.org/stevens-initiative/ to learn more.